In beautiful Benton County, the city of Rogers, Arkansas, is home to approximately 56,000 residents, making it the 8th largest city in the state. Found in northwest Arkansas, Rogers is a principal city in the Fayetteville-Springdale-Rogers Metropolitan Area. Named after Captain Charles Warrington Rogers, the general manager and vice-president of the St. Louis and San Francisco Railway, the city of Rogers has a long history dating back to its establishment in 1881. Rogers was incorporated in the same year.

Though the Walmart corporate headquarters is in neighboring Bentonville, Rogers was the location of the first Walmart store. Daisy Outdoor Products has both its Air Rifle Museum and headquarters in Rogers. Composed of 33.6 square miles, 0.1 square miles is water, Rogers is a great place to live, but don’t take our word for it. CNN Money ranked Rogers #10 on their list of the 100 best places to live in 2010. In 2007 Rogers was ranked 18th on the list of the 25 best affordable suburbs in the South by BusinessWeek Magazine.

This wonderful community is home to two shopping malls, Pinnacle Hills Promenade and Frisco Station Mall, as well as a commercial historic district with multiple properties listed on the National Register of Historic Places. Rogers also boasts fourteen neighborhood parks, five expansive sports parks, twenty-six athletic fields, five golf courses, a skate park, swimming pool and more than twenty-three miles of trails winding throughout the community. Those looking to relocate in the area will be pleased to discover the diverse real estate options with a median listing price around $201,000 and a median closing price around $174,000.

If you would like more information regarding homes for sale in Rogers, Arkansas, please allow us to assist you and contact us today.

Beaver Lake living has never been hotter than it is in 2021 and this house will redefine how you view Manufactured houses. This is a 2020 home on a level lot with over 3...

Lake view and lake frontage located in a wide cove with deep water. Approx 227’ of Beaver Lake frontage to call your own. This 2.12 acre tract is surrounded by beautiful ...

One of the most popular plans in Wire Ridge is the Addie Plan. Sit on your front porch and enjoy coffee, and watching the sunrise. Entertain in your large living room wit...

COMFORT AND SPACE! You will feel at home and want to stay awhile! Located in a cul-de-sac of a quiet street, yet right in the middle of everything, just minutes from Waln...

"It smells like 10-0 and a little bit of chicken"...this Rogers High School zoned beauty takes the cake. Let's start out back with a pristine saltwater pool to cool off o...

2 bedrooms and 2 bathrooms, value is in the location and home is being sold AS-IS. Not a perfect home but would be a great starter home or good for investor to remodel/fl...

Looking for the perfect home in the perfect place? Chances are you'll want to check here first. 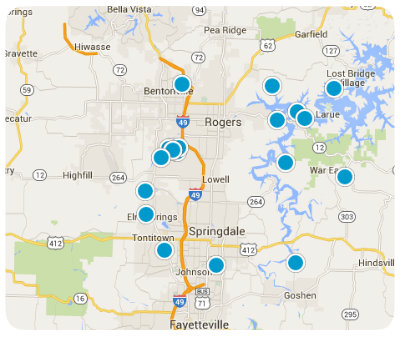